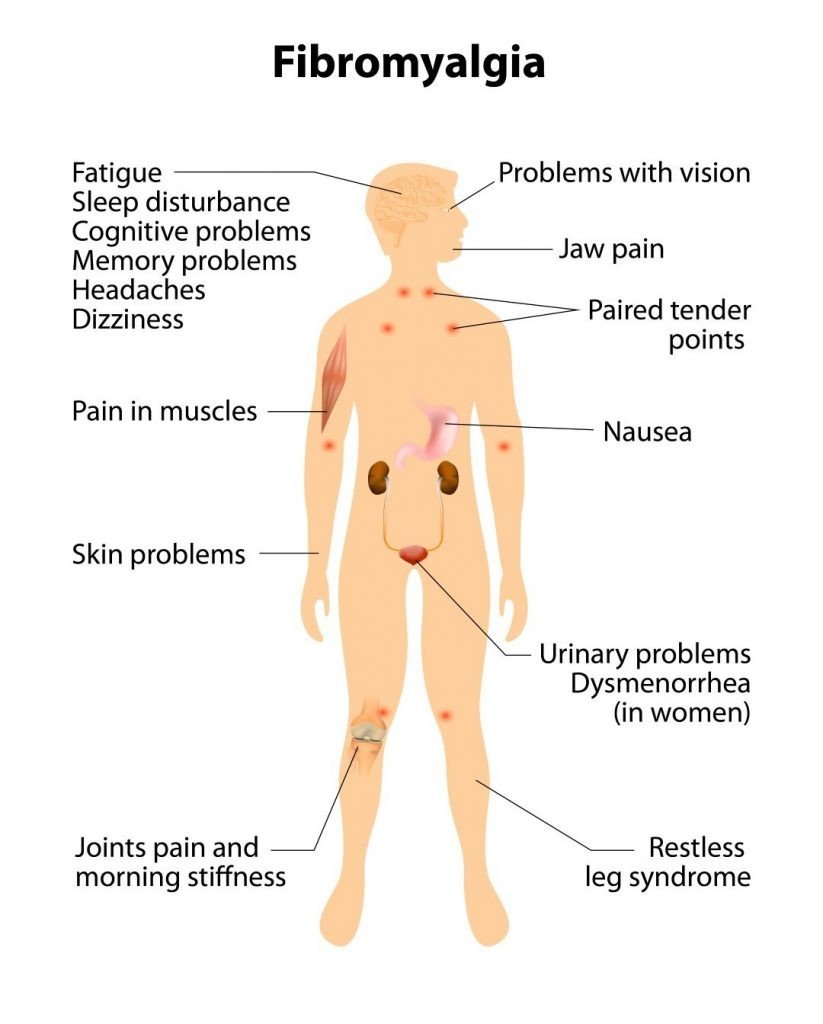 The aetiology of fibromyalgia is still unclear. Central sensitization is considered to be the main mechanism involved, but there are many other factors as genetic, immunological, and hormonal. Among these stands out the Autonomic Nervous System dysregulation which may play an important role.

There is definitive evidence to support the role of autonomic dysfunction. Central sensitization is considered as the main mechanism involved where there is an altered response of the CNS (Central Nervous System) during the management of the pain stimuli. It is called the “windup” – the main phenomena involved, which reflects the increased excitability of spinal cord neurons.

After a painful stimulus, subsequent stimuli of the same intensity are perceived as stronger – this occurs normally in everyone, but it is excessive in fibromyalgia patients.

Fibromyalgia needs a multidisciplinary approach, but within it, physiotherapy can help through the stimulation of particular acupoints. Points can have an effect on the central sensitization and in balancing the autonomic nervous system, improving the symptomatology. Aside from this, other forms of manual therapy and therapeutic exercises can be added to give further help.

How many sessions do you need?

The protocol that we use follows the guidelines of the Roland Solère method treating manifestations such as those encountered in Fibromyalgia.

The protocol provides 3-10 sessions. The session range is variable due to the factors in play, such as:

Do you have a needle phobia?

The stimulation of the points can be done with other methods such as cupping, manual pressure or magnetic acupressure patches.

For the assessment of the symptoms, we use a questionnaire, based mainly on COMPASS 31, in order to evaluate the progress along with the treatment.

If you are still unsure, fill the form and ask for free advice.

A Report of the Autonomic Symptom Profile in Patients with Fibromyalgia

Singh BB. Et al., (2006), Effectiveness of acupuncture in the treatment of fibromyalgia.

Questions? Get in touch

5 STAR CLINIC LTD has put in place several measures to assess and manage the risk of Covid-19 transmission.
Be aware that is not possible to completely eliminate this risk and that a face to face consultation will increase
the likelihood of you contracting COVID-19.

BEFORE BOOKING A FACE TO FACE APPOINTMENT:

We are following the CSP chart “Virtual first”, therefore you will be required to have
a Video Consultation at first(15min FREE), where a Triage questionnaire will be also administered.

At the end of the Video Consultation, we will decide if is deemed necessary
a FACE to FACE appointment or if we need to proceed with a virtual consultation.

Please DO NOT ATTEND:

SUMMARY OF MEASURE IN PLACE TO REDUCED THE RISK OF COVID-19 TRANSMISSION:

WHAT DO WE REQUIRE FROM YOU?

* Patient use of face masks

In clinical areas, common waiting areas or during face to face treatments patients is required to wear a surgical face mask.
The aim of this is to minimise the dispersal of respiratory secretions and reduce environmental contamination.
A surgical face mask should not be worn by patients if there is potential for their clinical care to be compromised (such as when receiving oxygen therapy).